Its been a while since I’ve visited a new climbing area. Its always fun to discover new places and climb on new rocks. New formations that you have never seen before or just getting inspired by climbing with new people with good vibes.

Straight off the first trad course I have conducted in 2017, I flew out of Taiwan to Chiang Mai to join a group climbers whom I have guided and climbed together. Its always great to hang out with a group whom you knew have learned something from you and still putting them to good use.

Chiang Mai is a charming little city in north of Thailand. I’m not super excited about the city but realised it has a lot to offer. Great massages, local jazz jams and nice hangouts. We were kept in the Anxiety State crisis cave for a day due to the rain. But still manage to find good stuff to climb in there. A 4 pitch 5+ easy multi pitch which will be great for our participants who are interested in doing their SNCS Sports Level 3/ Multi pitch course. The upper cave spots some super exciting multi pitch through the roof of the cave. There is also a new gem bolted by Francis Haden, Lift Off F7c. Great climbing on steep scaly flakes which features a very different style of limestone climbing.

After 4 days of climbing, I left for Bangkok to meet Kong, who’ve also attended a few of my courses in Thailand and Taiwan. He was interested to climb a route on Khao Chin Lae, Lopburi named Flying Farang. A 6b+ trad route with a little bit of reputation. Arriving in Bangkok DMK airport, I Uber to Silom and the pickup rig to NamPhaPaYai camp was waiting for me. Kong and I shot up on espresso and blasted to the crag.

It was mixed feeling to be in this crag since I knew the guy who put up the routes and put in the work on building the camp. Now that he is gone, I feel the place is missing something. However I thought I should visit this place for at least a day just to see what is left of the camp. Arriving on Sunday, the camp was busy with a large group of Americans who sat at the resturant till about 3am drinking and listening to loud music. I was dead tired so I slept through the night but Kong hardly got a wink.

The climbing in NPPY is great. Long routes of 25-35m with slightly steep walls,  giving the routes a different feel from most places I have climbed in Thailand. If you like technical climbing with a pinch of steep moves, there are many routes in NPPY like that. I got on Tufa madness – Sweet lip which is a classic 6c+ that you can pinch your way up or stem your way up. Also gave a good go at Pasak Ride a new 7b at the extreme right end of the crag. Beautiful climbing with various techniques involved and a problem solving crux at the end of the route. Inspired by Halil at Chiang Mai the previous day, I was on a onsight spree in NPPY. 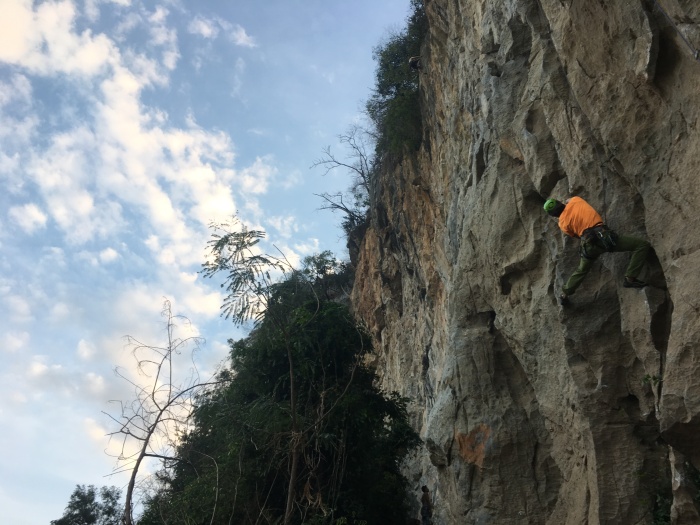 We woke up early and started the drive to Khao Chin Lae at about 6.30am. Was lost in the village road a little but also a great sight seeing drive. There is so much rocks around and I can’t help to feel that if there is no access problems in Thailand, the climbing here could be as good as Spain?

Got to Khao Chin Lae and hiked to the base trying to locate the chimney pitch of Flying Farang. Apparently this trad route never got repeated as I was told by Pleum the following day. The FA attempt  was completed with a head injury?! The route doesn’t follow a natural crack system so you constantly have to rely on the topo and also good sense on route finding to stay on good rocks. I went off route about 3 times and pulling off about 10 rocks in that process. We got to P3 and stuck in this gully of bad rock engulf in vines and cactus. After almost blowing a move and got some crazy ass thorn stuck in my finger from the cactus, I called it. Decided to rap the route and run over to Waltz with the Lovely Lady 5+ and blasted to the summit! 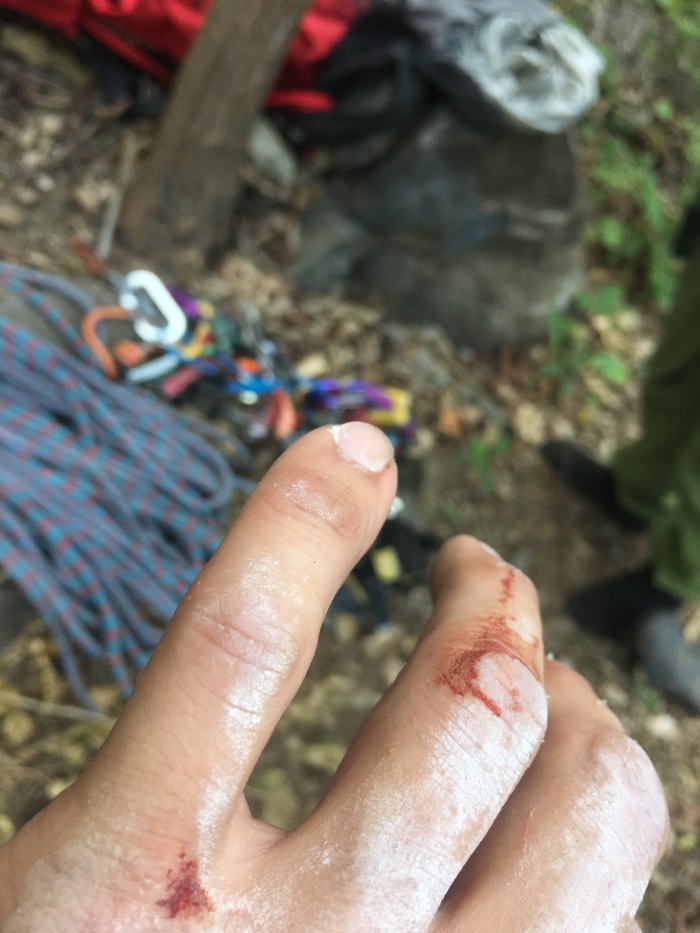 Walts with the Lovely Lady is a beautiful 7 pitch climb. Although graded only 5+, I feel that the run outs and route find is tricky and a good 6a lead climber with good multi pitch skills should attempt this. Bailing from the route can be tricky due to ropes may get stuck at various spots. Kong link P1 and 2 and I link P3,4,5 in one mega long draggy pitch. Kong got the the ledge tired and thirsty so I blasted P6 and 7 in order to prevent us rapping down in the dark.

Great views and very tired from 6 days of continuous climbing and a 10 pitch day. We drove back to Bangkok to my nice capsule hostel in Silom and sip away some single malts at Maggie Choo’s. Its been a while since I had a climbing holiday. =)

Want to climb at Lopburi? Look out for 2018 climbing courses and Rock trips to Thailand! You can also hit me up on qxadventures@gmail.com